A new family on the lake this week and it has been one of those sessions when everyone got what they wanted.

Mother and Daughter team, Kim and Mia, wanted sun, sun and sun, then a dip in the pool.  And for that the weather has been great, except for one day when it was a bit cloudy it has been hot, hot, and then hotter.

Officially this week the temperature has been in the high 30s, with local spikes up to 41-42C, but remember, the forecast gives temperatures in the shade, the scale on the thermometer on my patio records up to 50C and the mercury has been off the scale almost every afternoon in the sun.

The Ladies certainly got what they wanted !!

Despite the ongoing summer heat the fishing has continued to surprise me, ordinarily when the weather gets this hot the fishing slows down, often to a complete halt.

But not for Father and Son team Dan and Brad.

It being their first visit to Le Moulin I gave them the full guided tour, and they got all of my usual advice about finding the fish, feeding little and often, etc, etc.

Thankfully they heeded my advice, they followed the fish, tried very hard to pin them down with feed and keep them on one spot, but moved with the fish if they had to, and guess what ?  It worked.

32 big carp to 63lb is not the sort of haul we have come to expect in the summer, and given the exceptionally hot conditions that is quite a catch.

The Lads also took a very sensible approach to the heat, most afternoons they gave their swims a rest and joined the ladies around the pool.

Brad managed a total of 14 fish and took the Big Fish Award when he found Pumba who weighed in at a mere 63lb 02oz :

I have decided that Pumba is definitely a female, this is the second season she has been caught after spawning with the dramatic reduction in weight and all of the tell-tale marks of a female who has been battered and bruised.  Some of the females come out in a bit of a state after spawning and the bigger ones can lose 8-10 lbs once they release their eggs, thankfully they do make a full recovery and she will rapidly return to form and pack the weight back on during the Autumn months.

On a quick note about spawning, we still had fish spawning on Saturday morning, probably one of the last females to do it but once again it has been 2 months from them starting to finishing.

And please, before anyone says it, they cannot spawn twice in one year.  The females start making eggs in the Autumn and some do not release them before mid-summer, it is a massive process which takes time and energy, not something they can repeat at the drop of a hat just because the weather is nice !!

Dan took the Top Rod Award with a total of 18 fish, he tried hard to take the big fish award but had to settle for Odin at a stunning 60lb 12oz :

Odin was so named by my brother Glen many years ago when he was a modest mid-30, he packs on a regular 3 – 4 lbs per year with none of the massive weight fluctuations that females go through and I have never seen him with a cut or scab on his body, hence I suspect that Odin is a male fish.

Out for the first time in nearly a year it is his first venture in to the 60s Club, I hope he maintains his current weight gain trend and if someone is lucky enough to locate him during the early season next Spring I will not be surprised to find him topping the 65lb mark.

Each year there are trillions of carp eggs produced in my lake and they make a great food supply from egg through to young fry and beyond, everything eats carp at one stage or another.

As a result, very few, if any, actually survive to maturity, but we do have one or two that have been making a showing this season without ID-tags,  this little Common is a good example of one very lucky fish and has pushed the scales to 19lb 10oz : 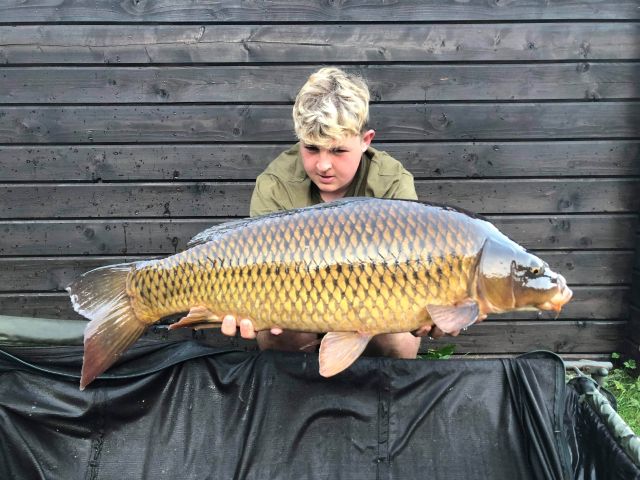 I will get to tag him one day and then I will be able to monitor his progress properly.  But for now it is suffice to say that he has the potential to be a stunner !!

All in all a great summer session and the final tally was :

A group of 4 on the lake this week and they are all dedicated anglers, I will let you know how they get on next weekend.

On a COVID-19 note, Helen and I have had a couple of Saturdays going through our new cleaning process and we are honing our skills, we are getting through things a little quicker than anticipated.

That is in great part because you are all helping us out by playing your part and keeping everywhere clean and tidy, I thank you all for that.  As a result it looks like we will be changing our opening time from 4pm back to 3pm.

I will write to each of you individually to confirm this.  See you soon, and stay safe.